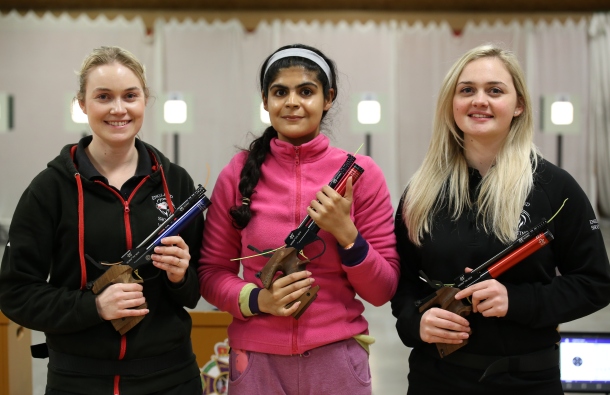 Minerva, who qualified third with 548, quickly established a healthy lead from the pack. Dropping only three high 8s and a wayward 6.5 in the entire final, she opened up her lead to finish a remarkable 5.5 points ahead on 229.8.

The Moss sisters fought it out for the remaining podium positions, with Imogen gaining Silver on 224.3, and Shelly Bronze on 205.3. “I was shooting too slowly in the qualifiers, so I was staggered when I achieved just one off my PB,” said Imogen. “The final was really consistent, but I dropped a 6.2 and a 7.5, which was my undoing.”

Sister Shelly was briefly in the lead before being overtaken by Minerva in the second round of the first stage. “At the beginning I was in first place, but my nerves got to me. From then on, it was about chasing Imogen. I’m delighted with today, I have turned a corner.”

The men’s final was a tense, closely fought battle between defending champion Kristian Callaghan, Waldek Mickiewicz and Aedan Evans. Waldek qualified in first position on 573, with Kristian just two points behind on 571. Kristian took an early lead in the finals, but consistent high 9s and 10s across the board kept all three within a whisker of one another.

Then, in the last few rounds, Kristian dropped an 8.5 and an 8.1, which saw him fall dramatically to third place on 216.4. Waldek and Aedan rose to Gold and Silver with just a point to separate their scores of 240 and 239. “I’m suffering an injured shoulder, arm and fingers," said Waldek, “but even though I’m not shooting at my best I’m pleased I still won it. I’ve decided to take a few months off now to recover from my injuries.”

Kristian was sanguine about just missing out. “At the beginning of the final it was going well, but then I shot fewer 10s and more 8s. I’m not sure why — but being on the podium is good enough. It’s been great preparation for the European Championships in Poland.” Paralympian Issy Bailey took Gold in the Disabled Final on 222.5 with a mixed bag of scores. In fact, all four competitors struggled with consistency. “I’ve been really busy studying at University, so I just didn’t put the training in over the winter,” admitted Issy. “But today’s been really good. It’s fun to see everyone, and great to be shooting among able-bodied competitors.”

Lucy Evans triumphed in the Women’s Junior Final, taking gold with a British Junior record winning 236.3 – breaking the record by 0.2. Defending Champion Emilia Faulkener trailed closely behind, almost catching Lucy at the start of the second stage with a difference of just 0.7. But Lucy continued to shoot 9s and 10s, just dropping one 8.8. Emilia took silver with 234.9 and Hannah Glover - last year’s silver - was awarded bronze with 210.8. “I suffered a few errors qualifying, so just scraped through to eighth place with a score of 535,” said Lucy. “Despite being neck and neck with Emilia in the final, I just managed to hold on to the lead. I came to the final with low expectations, so it was amazing to win with a record beating score!”

“When Jack took a 0.5 lead, I thought I was going to pee my pants!” joked Ayush Chauhan, who took gold in the Junior Men’s Final. Despite holding a two-point lead in the early parts of the final Ayush dropped a 7.7 in the third to last stage, giving rival Jack Lovett the opportunity to push past. Somehow, Ayush managed to stay focused (and dry) enough to score a brilliant run of tens that saw him safely win gold on 232. Jack was just behind on 229.3 with defending Champion Andrew Walker taking home bronze this year on 208.9. “I just focused on the sights, and did everything consistently to take first place,” said Ayush.

Jack Lovett had a lacklustre day. “None of the shots felt great, I was just watching the sights and hoping for the best — there was definitely room for improvement.” Meanwhile, Andrew Walker had high hopes, but it was not to be. “Trying to retain the championship title brought on the nerves,” he said. “I need to remember to have fun and not overthink.”

NSRA Chairman John Lloyd was delighted with the weekend. “It has gone brilliantly. We’ve seen a record entry of over 200 shooters, and some really good quality shooting. I’m pleased to see more young people coming through, which indicates that the sport is getting stronger at grass roots level. I look forward to doing it all again next year.”