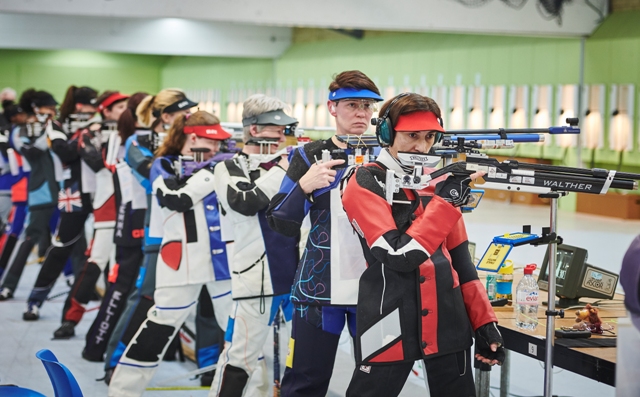 A pair of junior rifle shooters who come from the same club and were born on exactly the same day have now got something else in common – they both won gold medals at this year’s BOAG Championships.

Tom Warren won the Junior Men’s Rifle final, while Bethany Edwards took the gold in the Junior Women’s Rifle event. The 19-year-olds share the same birthday and are both members of Crewe Rifle & Pistol Club.

Tom won his gold with a score of 236.2, with silver medal-winner Max Dandeker-Bourne (Havant) in second place on 232.8 points and Harry Vincent (Crewe RPC) taking the bronze with 214.3. Tom, like the other Junior Men’s medal winners, is a member of the GB Talent Squad. He’s been shooting for around eight years and has been using his electronic Walther LG400-E for a year now.

“It’s tight at the top” was a phrase heard more than once as the live scores on the leaderboard proved, with numerous competitors repeatedly rising or falling down the ranks with each shot taken.

Bethany, who is also a Talent Squad member, won her gold medal in the Junior Women’s Rifle Final with a score of 238.6, with Michaela Green (Havant) earning her silver with 237.1 and Isabel Stark (Robert Gordon University) going home with the bronze after scoring 216.7 points. Bethany’s been shooting for five years, initially taking part in both Pistol and Sporter before focusing on Precision, in which she uses a Walther LG300, although she still occasionally shoots Pistol too.

James Paterson (Driffield) won gold in the Senior Men’s Rifle event with a score of 245.5, with Thomas Diggle (Edinburgh University) in second place with 244.2 and Fabio Holder (Bedford) in third with 220.1. James has come a long way since he started shooting, explaining: “I had a go at my local club and missed the target.” He now enjoys the demanding nature of the sport and shoots hundreds of pellets a month while practising for his next competition. He also emphasised the importance of taking in the right amount of food and drink before a match – with many competitors bringing a bottle of water to the firing line to ensure they stay hydrated while they shoot.

Concentration is one of the keys to successful shooting for James, who said. “One of the hardest parts is staying focused. One or two bad shots can ruin a match. You’re not trying to do 60 shots – you’re trying to do one shot 60 times.”

While disabled athletes normally shoot in different classes depending on their disability, the BOAG event saw SH1 and SH2 contestants shoot together in the Mixed Disability Rifle Competition, with Joshua Wintersgill (GBTS) emerging victorious with a score of 247.8, while Helen Legg (DSGB) was second with 246.6 and Nigel Dewing (Sportsable) was in third place with 223.2 points. Josh has been shooting for around four years and loves it, saying: “It’s such a precision sport, but it’s good fun nevertheless.” He’s just below the world class programme at the moment, but is setting his sights on getting a place for the Paris 2024 Summer Olympic and Paralympic Games.

Competitors in all the Rifle Finals were treated to a selection of classic tunes coming out of the loudspeaker while they shot, as well as some tension-building slow clapping from the audience as the rest of the field was eliminated, leaving the remaining three shooters to fight it out for gold, silver or bronze. Despite the high level of concentration required, the competitors said they were well aware of what was going on in the background, but generally did their best to blank it out.

More slow-clapping was evident in the Senior Women’s event, which gold medal winner Amy admitted was “not so much of a help”, although she conceded it did help build excitement. She attributed her success to her ability to control her nerves and her ability to persevere. She said: “Everybody feels nervous, you wouldn’t be human otherwise. As for perseverance, when you’re doing badly, just keep going.” The Championships also hosted the Home Countries matches, Scotland beating England in the Men’s Rifle event, and the tables being turned with England beating Scotland in the Women’s.

The British Open Airgun Championships have been held annually at the Lord Roberts Centre at Bisley since moving there from Cardiff in 2002, and this year’s event attracted 202 entrants, some travelling from as far afield as Scotland and Guernsey.

While many of the competitors were of an international standard, shooting in either the Commonwealth or Olympic Games, others were first-time entrants, with the Championships giving them their very first taste of a serious competitive environment.

Match Director and NSRA Chairman John Lloyd explained how shooting is one of the most all-inclusive sports available, catering for people aged eight to 88, and for athletes with a wide range of disabilities.

Many of the junior shooters come into the sport either via local shooting clubs or The Scout Association. “This is all about the progression of young people, as they are the future of the sport,” added Mr Lloyd. Here’s to a bright future.