Exclusive - On Target for Tokyo

As Seonaid McIntosh prepares to represent Team GB at the Olympics in Tokyo, she tells us her experience of lockdown and how she’s prepared for a postponed Games.

Seonaid McIntosh’s three-year build-up to the Olympic Games is nearly complete. She first won a quota place at the World Championships in Changwon in 2018 and now we speak to her just five weeks before she boards the plane for Tokyo – a year later than scheduled!

We all faced our difficulties during Coronavirus lockdowns, sacrificing freedoms and cancelling plans. But postponing an appearance at the Olympics – potentially the crowning event in any athlete’s career – must have been on a different level.

Seonaid, however, describes herself as a go-with-the-flow sort of person. She took the postponement in her stride, and is far more focused on what she can achieve in the future, rather than what she missed out on in the past.
“A lot of the competitions were being cancelled as we went along,” she says, referring to the early days of the pandemic. “When we got to the point where events scheduled after the Olympics were being called off , it became clear they were going to be cancelled. When it was finally confirmed, it wasn’t shocking – if anything, it meant I could move on and destress about what would happen.

“To be honest, I was in a relatively good position. I feel bad for all the athletes who were at the end of their careers and couldn’t maintain their standards for another year, or wanted to move on with their lives, have children and so on – who would have competed in 2020 but won’t this year. But I’m still qualified and able to go.”

The original lockdown in 2020 was the beginning of a strange event for any dedicated shooter: an almost six-month period where Seonaid didn’t touch a rifle. “I didn’t have access to a range, rifles or anything like that – it was a total break. So I worked on my fitness, which I don’t often get the chance to do if I’m travelling all over for competitions.

“My support got moved online. Physio consultations were over the phone, which worked reasonably well, even if it was frustrating at times. Sometimes I had aches and niggles that I knew could be fixed in half an hour if I could go and see a physio, but was guaranteed to take a lot longer when managing myself!

“My strength and conditioning coach was really helpful, setting up a programme that I could do from home with the equipment I had available to me. And my psych support was over the phone – it didn’t feel too different.”

That psych work must have been key as most of us can empathise with the difficulty in staying upbeat and focused during the monotony of lockdown. “Sometimes it can affect motivation,” Seonaid admits. “If you haven’t got anything you can work towards, that you can see on the horizon, it’s a bit difficult to stay motivated for day-to-day training.

“In the end I looked at it like this – when you’ve got loads of competitions back-to-back you usually think, ‘I wish I had a break!’ You just want to sit on the couch and watch TV or read books. Now, that big break actually has come along, so it doesn’t make sense to be like, ‘I wish I had competitions…’ You have to make the most of what you’ve got.”

Being in Scotland, Seonaid’s return to competitive shooting followed a different path to the English contingent. “The rules are different here,” she says. “The framework for athletes returning to sport was different. My sister, who’s the Performance Manager for Scottish Target Shooting, was in charge of the return to training work. She worked hard to get us back to it. For me, that means risk assessments for the venues I train in. The protocols change every few days because governments update the rules every few days – so it’s all about being adaptable and not getting too stressed when things change.

“I actually didn’t get back to shooting with other people until relatively recently. It does add extra elements – not distractions, because I know how to deal with those, but just things I haven’t encountered for a year, like being aware of other people moving around me, making noises, dropping things.

“I needed to get used to that again and remembering it’s actually normal!”

That led into the European Championships in Croatia – the only post-lockdown experience of competitive shooting Seonaid will have before she departs for Tokyo. “It was a mixed experience. It was good to be back; I was pleasantly surprised to find that, in some respects, it didn’t feel like I had been away for that long. On the range, I struggled a little bit with the wind. It may just have been a tricky range – or I may have forgotten how to read the wind! So I may need to work on that. But the mentality was good, and the breathing was fine. It’s like muscle memory – it comes flooding back.”

When it comes to the Olympics themselves, in a country that still has a high rate of COVID prevalence, the priorities are clear: safety first, and results second. When it comes to the former, how does Seonaid feel? “I do feel safe. They wouldn’t let us go if it wasn’t. I expect there will be a few cases at the Olympics, due to the sheer numbers of people there – but it will be a relatively small number and will be really well managed. I’m fully confident in organisers’ ability to put COVID protocols in place and keep us safe. I’m also double-vaccinated already!”

That brings us to the second point: what is Seonaid's goal for the Games? “Last year I might have given you a different answer, but with everything that’s gone on and having only had one competition in the run-up to an Olympics, it’s so hard to tell what form I’m in, or what anyone else is in.

Seonaid has clearly taken the pandemic in her stride. She talks about all her plans for post-lockdown: not just shooting but seeing family, developing her academic career, reading the novel her sister Jen has written. It’s a testament to her resilience that she’s not placing any undue pressure on herself. “I’m the sort of person who always looks for the bright side – I realise there’s not much of a bright side to the pandemic, but I do try and think positively rather than dwelling on the negatives.

“My attitude towards competitions has always been the same: it’s all about the performance, not about the outcome. I’m still working towards being able to put in good performances. That hasn’t really changed.”

WHAT DOES THE FUTURE HOLD? 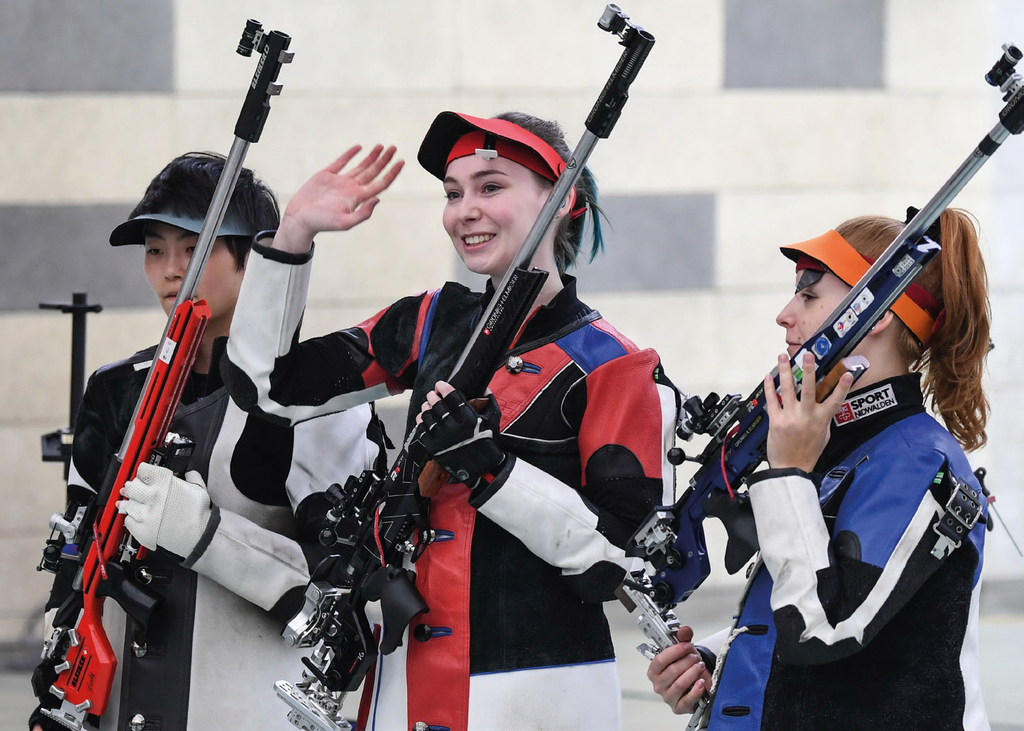 Seonaid told us what she’s planning after Tokyo, and what her longer-term career plans are:

“I’d love to go to Paris in 2024, if I can. After that, I’d have to seriously consider where my career is at that point, since I’d really like to have a non-sporting career as well. But I would like to go to Paris first. It’s only three years away – not that long! Of course, there’s no guarantee I will still be at the required level to go, but it’s something I’m thinking about already.

“I’d also really like to go to the Commonwealth event in India in 2022. There’s still a lot of information we don’t know about the event – such as which city it’s going to be in, or which disciplines will be on the programme. But certainly I would like to be in the team and to represent Scotland – something you don’t get to do at any other point!”