New Antique Firearms Legislation has now been published and is available at:

This includes the new definition of ‘antique firearm’ that will come into effect on 22 March 2021 and a transitional period for licensing etc. of former antique firearms will run for six months until 21 September 2021.

Changes to the Law on Antique Firearms

The law on antique firearms is changing.  From 22 March 2021 some firearms previously regarded as antique, and therefore exempt from control, no longer qualify as such and must now be licensed.  Owners of these firearms must act by 23:59 on 21 September 2021 to licence them or lawfully dispose of them.

Section 58 of the Firearms Act 1968 and the Antique Firearms Regulations 2021 set out in law which firearms can be regarded as antique, and therefore exempt from licensing.  The definition closely follows the model used previously in Home Office guidance and will therefore be familiar to collectors, dealers and museums. To be regarded as an antique, a firearm must:

Following their use in crime, seven cartridges which previously appeared in the Home Office obsolete cartridge list have been omitted from the equivalent list in the 2021 Regulations. These cartridges are:

This means that from 22 March 2021 all firearms chambered for use with the above cartridges will become subject to the controls in the 1968 Act, including licensing.

There will be a transition period of six months from 22 March until 23:59 on 21 September 2021 during which owners of such firearms can decide what they wish to do with them.

People who possess such firearms immediately before the Regulations come into effect on 22 March 2021 can apply to their local police firearms licensing department to retain them on a firearms certificate.  Application must be made before the transition period ends at 23:59 on 21 September 2021.  As long as a person has applied for a firearm certificate, they will remain in lawful possession of their firearm even if their application remains outstanding or is the subject of an outstanding appeal when the transition period ends.

Should a firearm meet the criteria for a historic handgun under section 7 of the Firearms (Amendment) Act 1997, the owner can apply for a certificate on this basis.

If the owner of a firearm that no longer falls within the definition of ‘antique firearm’ chooses not to licence it, they will need to otherwise dispose of it before the transition period ends at 23:59 on 21 September 2021.  Disposal could include selling, exporting or deactivating the firearm, donating it to a museum or surrendering it to the police.  To enable this, owners will be able to freely sell or transfer the firearm to another collector or to a museum without requiring a firearm certificate, section 5 authority or a museum firearms licence.  Owners can also sell or transfer the firearm to a dealer, but only one who is registered with the police and who has a section 5 authority.  In all cases, the new owner must then apply to the police for a firearm certificate or museum licence in respect of the firearm before the transition period ends at 23:59 on 21 September 2021.

Museums can also sell or transfer such firearms freely until the transition period ends at 23:59 on 21 September 2021.  Where a museum purchases or acquires such firearms, they must apply before 23:59 on 21 September 2021 for either a museum firearms licence (with the authority of the Secretary of State or Scottish Ministers to possess any which are prohibited weapons) or a firearm certificate.

Further details about the changes to the law are set out in a HO circular: https://www.gov.uk/government/publications/circular-0012021-antique-firearms. 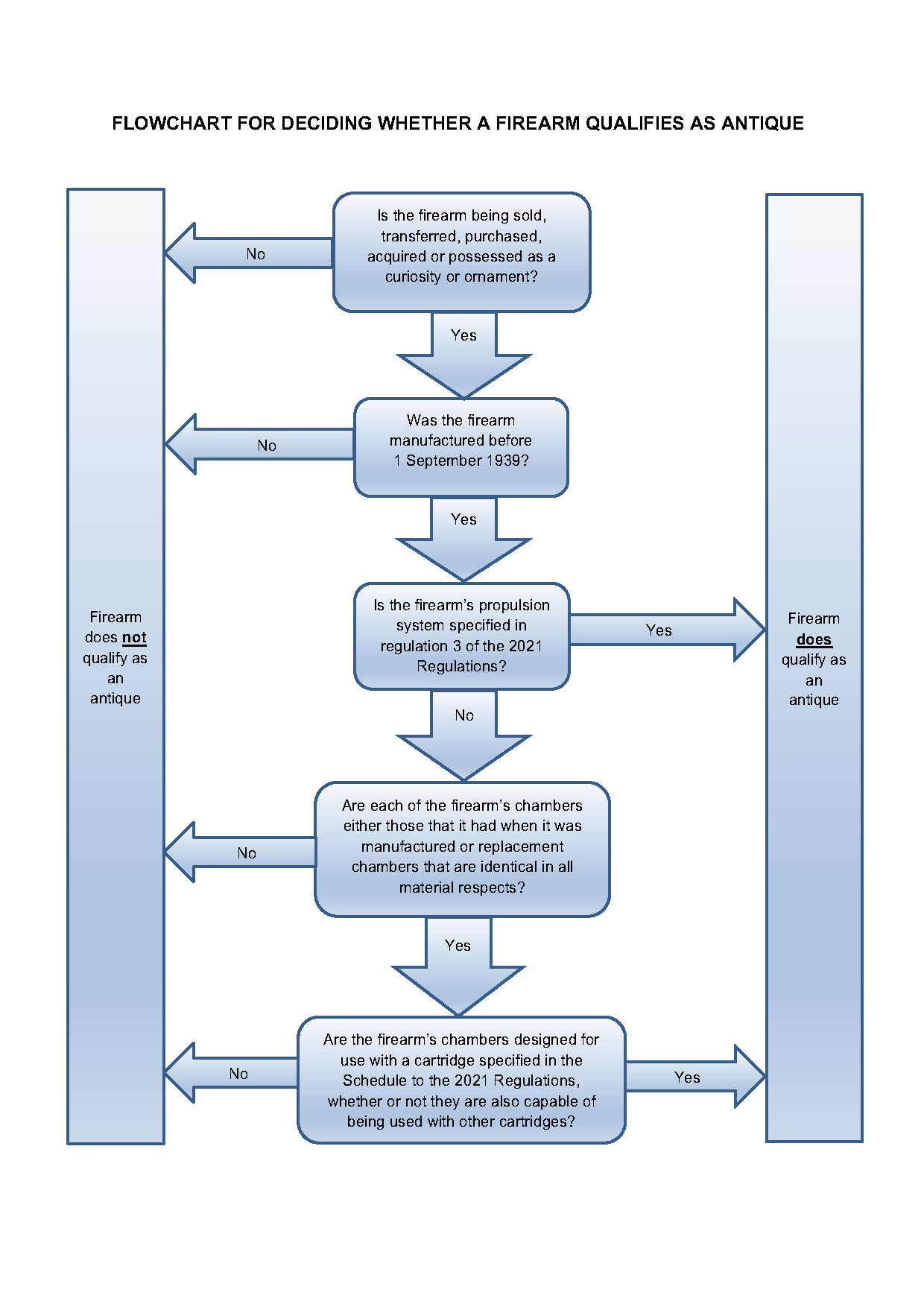