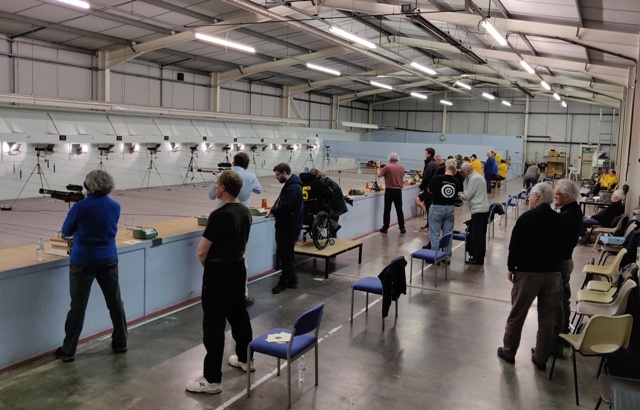 Located centrally in England, the NSRA's West Midlands ranges at Aldersley Wolverhampton once again welcomed blind and visually impaired shooters from across the UK.

Competitors from Aberdeen to St Austell in Cornwall and Dublin in Eire to Grantham in Lincolnshire took part in a relaxed but competitive atmosphere.

The firing points, with their special configurations for EcoAims and Swarovski sight systems, were set up by Range Manager Tony Taylor and his local team of volunteers together with Charlie Blow, an NSRA Trustee and Paul Holdstock of Cheadle RPC.

The Clubs represented at the event were Hereford, Okehampton, Bon Accord (Aberdeen), Somerset, Blackburn, St Austell, Tubslake, Holwell, East Barnett, Grantham and Helston together with a competitor from Dublin competing in his first Blind/VI competition.

The various trophies were presented in the afternoon by John Lloyd, the Chairman of NSRA.

Acoustic rifle shooting continues to  expand in the UK under the guidance of Charlie Blow who took on the challenge following the death last year of Ken Nash who had previously promoted acoustic shooting for many years.

A new competition is being set up for September 12th this year details of which will be circulated to all Blind/VI clubs soon.