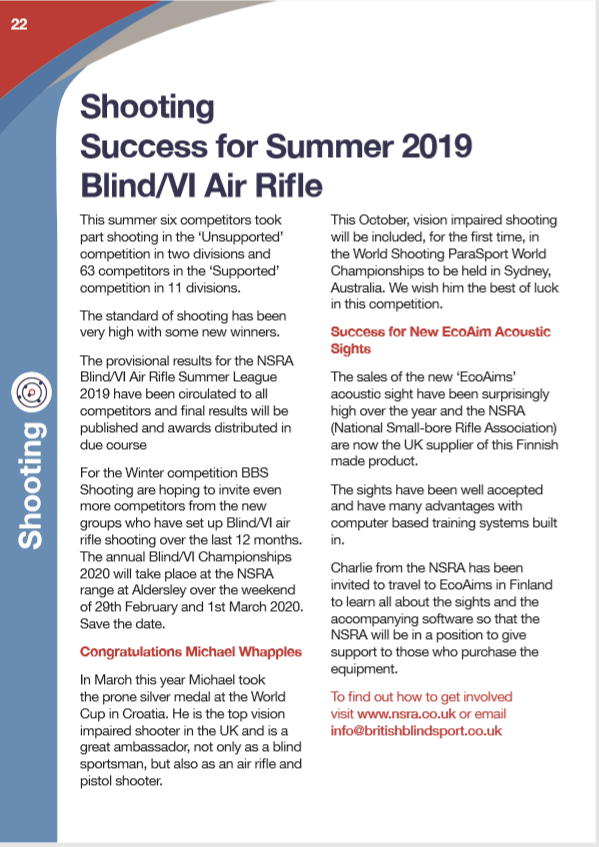 The standard of shooting has been very high with some new winners.

The provisional results for the NSRA Blind/VI Air Rifle Summer League 2019 have been circulated to all competitors and final results will be published and awards distributed in due course.

For the Winter competition BBS Shooting are hoping to invite even more competitors from the new groups who have set up Blind/VI air rifle shooting over the last 12 months. The annual Blind/VI Championships 2020 will take place at the NSRA range at Aldersley over the weekend of 29th February and 1st March 2020. Save the date.

In March this year Michael took the prone silver medal at the World Cup in Croatia. He is the top vision impaired shooter in the UK and is a great ambassador, not only as a blind sportsman, but also as an air rifle and pistol shooter.

This October, vision impaired shooting will be included, for the first time, in the World Shooting ParaSport World Championships to be held in Sydney, Australia. We wish him the best of luck in this competition.

The sales of the new "EcoAims" acoustic sight have been surprisingly high over the year and the NSRA (National Small-bore Rifle Association) are now the UK supplier of this Finnish made product.

The sights have been well accepted and have many advantages with computer based training systems built in.

Charlie from the NSRA has been invited to travel to EcoAims in Finland to learn all about the sights and the accompanying software so that the NSRA will be in a position to give support to those who purchase the equipment.

To find out how to get involved visit www.nsra.co.uk or email This email address is being protected from spambots. You need JavaScript enabled to view it.