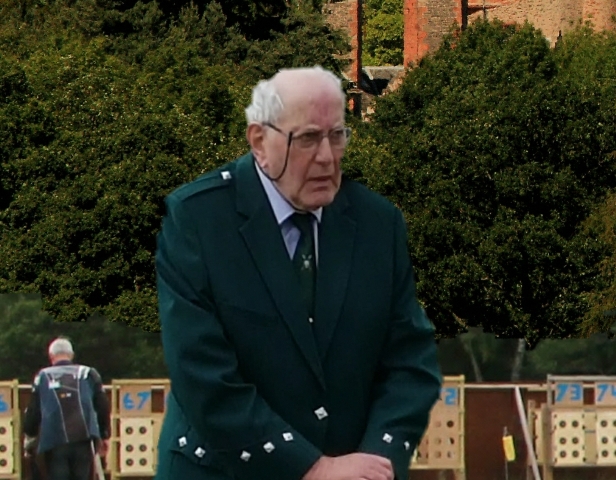 A great friend and supporter of the NSRA kindly written and contributed by Peter J Chatfield (Hon. Sec. C&NTSA)

It is, with great sadness, that I announce the death of George whilst in hospital. He was born near St. Boswells in the Scottish Borders, attended school at Galashiels Academy and worked for a while on steam trains. In 1955 George was called up for National Service which included a transfer to Malaya where he worked with the Ghurka Military Police for 2 years. With his imposing stature and presence, George enjoyed police work and in 1958 he joined Northumberland Police, based in Morpeth and whilst there started shooting in 1959.

In 1961 he married Jean and in 1966 they moved to Berwick. In 1976 George was promoted to Sergeant in Northumbria Police, moved back to Berwick in 1979, retired in 1989 and settled in Coldstream. George was passionate about target rifle shooting and could be found at many events accompanied by Jean and their two children David and Joyce. He was member of Berwick RBL Rifle Club for many years, was a member of the British “400” club, represented Scotland at international level in both the 1970s and the 1980s and also shot for the British Police on numerous occasions.

After coaching and officiating at all levels, George was persuaded to act as a temporary “stand in” and thus became Chief Range Officer for both Bisley and Scottish National Meetings for 20 years. He was always softly spoken, very kind and helpful to new shooters of all ages as mentor and friend but was also well known for his stern approach to Chief Range Officer duties and could easily make himself heard if someone transgressed on the firing point!! His “scoring” career commenced at the Scottish National Meeting at Blairgowrie in 1979. To our gratitude he also found the time to act as the senior scorer at Northumberland’s “Vaux Trophy” Open Shoot and at the Scottish Borders Field Shoot and scored several postal competitions on behalf of Northumberland / Cumbria & Northumbria County Associations.....successful challenges to his scoring were very rare.

George joined the NSRA Shooting Council as the representative for Scottish Southern Counties in 1997 and, in about 2014, changed to become the representative for Cumbria & Northumbria TSA. He was Chairman for C&NTSA from May 2015 and, in 2019, agreed to become President of Felton & District Rifle Club. George was elected to the NSRA Special Awards Committee in 2000 and received the NSRA’s Silver Award in 2008 followed by the Gold Award in August 2013.
His funeral took place on Friday, 27th March 2020 with a very restricted gathering due to the Coronavirus epidemic. We salute his passing and doubtless thoughts will turn towards a fitting Memorial when times become calmer. George was a much loved husband and father and will be greatly missed by his family, friends and fellow shooters across the country.