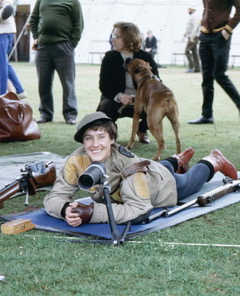 Chris McIntyre began rifle shooting in 1956 along with her late husband Jimmy and joined Fortwilliam Rifle Club in 1956 though later transferred to Downshire Rifle Club in Hillsborough in 1964 where they both remained members until their deaths.

Chris enjoyed shooting and during her shooting career represented Downshire Rifle Club and Northern Ireland on many occasions. Chris competed in competitions in Ireland, both North and South, bringing home many medals and trophies over the years.

Chris took part in postal competitions right up until 2004, when unfortunately she had to stop shooting due to her failing eyesight. She represented Northern Ireland in the Ladies Home Countries International Team many times and feverishly supported the Northern Ireland Home Countries Team. She won the Roy Graham Salver in 1995 at the young age of 64.

Chris competed at every NSRA Scottish Meeting from 1957 to 1997 and after this continued to go over to spend time with the many friends she made over the years. Chris and Jimmy both spent a large amount of their time at Downshire Rifle Club, if not shooting then helping juniors and other shooters. Chris was on the Club Committee for many years and she was Club Secretary from 1979 to 1982. She returned to the role she loved again in 1990 remaining Club Secretary until 2017. In total Chris was Club Secretary for 31 years, during which time the club membership grew from less than 50 members to over 100.

Chris was a Committee member of the Ulster Counties (East) Small-bore Shooting Association, UC(E)SSA, the Governing Body for Ulster and was Vice President an appointment she was very proud of and remained Vice President until the formation of the new Governing Body of Northern Ireland - Northern Ireland Small-bore Shooting Association - and was again made Vice President. She was a scorer for the Ulster Postal League and enjoyed keeping up to date with the achievements of local shooters.

Chris will be sadly missed by not only Downshire Rifle Club and the shooting community of Northern Ireland but also further afield by the many friends she made over her 60 year shooting career.