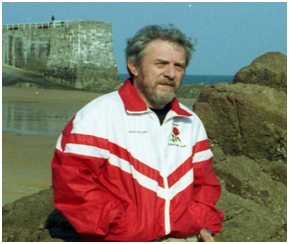 Dick, like so many people of his generation and background, started his shooting career with his school’s combined cadet force. By his own admission he was useless with a .22 rifle but was always proud of the fact that it took him hardly any time at all to get his Marksman Badge with a .303.

After leaving school he joined what was then the General Post Office Telephones and joined one of their clubs that shot under Waterloo Bridge but his heart was never in it and he soon gave it up. A chance meeting with Mike Bishop got him involved in air rifle shooting with the Air Rifle Clubs Association. He helped start and run their first air pistol competition.

In 1972 he joined Ashford & District Rifle Club. This led to entering the Kent Pistol Championships in the old chalk pit at Darenth. As with most people who enter an open meeting for the first time he entered everything he could. Rapid fire was being run by Bill Edgar and Hugh Hunter who explained the rules and then let him get on with it. By the end of the match he had decided that shooting a .22 lr Walther was not the way to go and applied for a variation for his Firearms Certificate to buy at Vostock Rapid Fire Pistol. This over the years became a Walther OSP, Unique VO79, FAS 601 and finally a Pardini.

As a rapid fire shooter he represented both England and Great Britain. He was English Champion on several occasions and also British Champion. At the inaugural Commonwealth Championships in New Delhi, India he won silver medals in both the pairs and individual matches and a team bronze in Lankawi. He just missed out on the team bronze at the Kuala Lumpur.

As a member of Carshalton Rifle Club, he served as a committee member, Pistol Captain, Chairman and - after he moved away - as Vice President. He also served on the Surrey Committee as Pistol Captain where, with Colin Woolley, he ran the Surrey Open Pistol Championships. It was at the Surrey Championships that he first borrowed a desktop computer to produce the results. While this is standard practice now, it was revolutionary then. He was soon in demand to do the results for the other pistol meetings at Bisley as well as the Nordic Games when they were held there.

At the same time as he was in the National Squad (rapid fire) he also started coaching rapid fire with the South East Regional Squad at Dartford. He did this not only to impart the latest training methods but also by teaching them it helped imbed them into his own technique. Following the pistol ban he moved his pistols out to Switzerland which allowed him some training leading up to the Kuala Lumpur Commonwealth Games, after which he retired from competing at the top level but continued air pistol at club level as well as coaching with the briefly run 10m rapid fire squad and then later with the TENS and reformed SERPS squads. His last coaching with SERPS was only two months before he died.

In the last few years he started shooting with British Alpine Rifles in Switzerland. Unfortunately he could not make their shoot at the end of October as he realised less than a week before he was due to go, that he was now too ill to be able to attend. It was a testament to his refusal to give in to his illness that, despite having been told that he had less than a year to live in August 2018, this April he won their rapid fire match in Switzerland beating two other Commonwealth Games competitors.

In addition to his shooting activities, having retired at 51, Dick spent 25 years as a volunteer at Kew Bridge Steam Museum both as a driver and doing maintenance on their pumping engines until ill health forced him to stop in 2016 but he continued with his work designing leaflets and posters for the museum having already digitalised their photographic records and plan drawings.

Dick always wanted it known that he was not battling cancer, the NHS was battling the cancer, they were just using his body to fight over.

The cremation took place on the 25th November at Easthampstead Park Cemetery and Crematorium and was attended by over 100 people from both shooting and the museum as well as family and friends. Dick never married but will be greatly missed by his brother, nieces and nephew and many friends.

The last words should go to Belinda Forbes the celebrant for the Service “I lost count of the number of people who came up to me afterwards wanting to tell me about Dick and what a great man he was”.