It is with great sadne 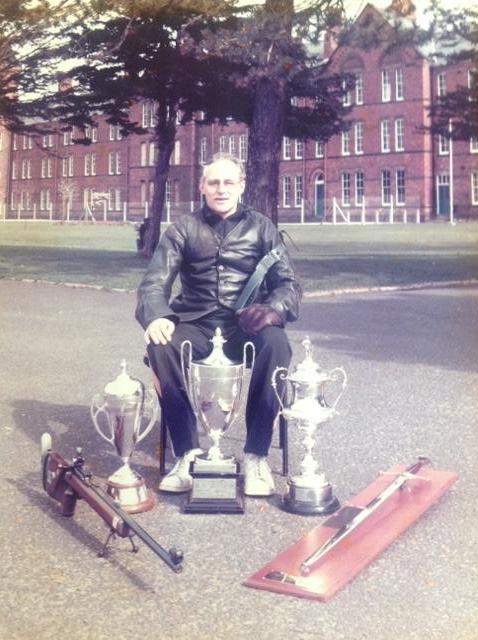 ss that we have received the news that Major (Retired) Peter Martin MBE passed away on the 6th October 2018. Peter suffered a recent stroke which was then followed by pneumonia and sadly he never recovered. Peter has been an ATSC Small-bore member since 1983 and will be sadly missed.

To many of us in the shooting family Peter represented an iconic figure, whom over many decades and generations gave his life and soul to the sport he loved so much. Not only was he an excellent shot, achieving the highest accolades in the sport, but he was also a true exponent of the values and standards expectant of our shooting sport. There are many shooters today, including myself, who owe their presence in the sport to his very generosity, encouragement and sheer enthusiasm for all matters shooting. Peter epitomised the good in sport and will be remembered as much for his leadership skills, organisational acumen and coaching wisdom as for his undoubted sporting achievements.

Peter Martin was born on 9th September 1928 in Shipley, North Yorkshire and after a family move to London and the South East was educated in Reading at EP Collier School. At the earliest opportunity, Peter joined the Army and enlisted in Reading, March 1946, and was sent to 28 Training Regiment based in Belfast, Northern Ireland. As one would expect of one so personally talented, there followed a meteoric rise through the ranks. Following a posting to 1 Royal Hampshire Regiment serving in Bulford, Minden and Luneburg, he was promoted Sergeant in April 1952.

It was during this time with the Regiment that Peter first met Margaret in 1947 and they married in June 1949. They were to have two children in the immediate future, with Peter being born in January 1951 and Janet Denise in March 1952. They were then sent to serve with 1 Wiltshire Regiment, stationed over the next three years in Hong Kong and Cyprus, where Peter was promoted to WO2. After further postings to The Duke of Edinburgh’s Royal Regiment, he was commissioned in March 1968. It was here with the Royal Regiment that Peter’ shooting career all started when his team won the inaugural Duke of Edinburgh’s Trophy in Cyprus in 1967.

There were to follow a series of promotions and moves as Peter served in Quartermaster appointments across the globe with a variety of West Country Regiments, including The Devon and Dorset and Worcester and Sherwood Forester Regiments. Peter and Margaret retired from the Army in Lichfield in 1983, although Peter was to carry on serving as a retired TA Quartermaster based in Derby for another five years. It should be noted that Peter was also a fine athlete over 400m and a respected hockey player and latterly umpire, reaching county and representational level. On retirement Peter and Margaret settled in Whittington Village, near Lichfield where they remained. In November 2015, Peter deeply mourned the loss of Margaret to illness.

Although Peter was an excellent service rifle shot within the Army, it was in the field of small-bore target rifle shooting that he naturally excelled, both in Service and civilian terms. He represented and captained the Army Shooting Team from 1971 through until 1982 and the Combined Services from 1976 to 1982, also winning the Wilkinson Sword as the Combined Services Long Range Champion on five occasions during his service career, 80-82, 84, 86. On the civilian international front he was a member of the Dewar Team on five occasions including the year he won the Earl Roberts National Championship at Bisley in 1981, setting and holding the Championship record of 792 ex 800. He shot in English International Teams four times over the same period. Also, this was the year that he was selected for the Pershing Team to the USA and in the following year he was selected to represent Great Britain at the ISSF World Championships in Mexico. His tireless commitment for target shooting in the Army was recognised by the award of the MBE in 1982.

As his shooting career continued to advance, he was elevated to be Adjutant of the Dewar Teams in 1984, 85 and 86 as well as Adjutant the British Roberts Team against the USA at Bisley in 1985. Finally, his international accolades included captaining the 1987 Dewar Team and the 1989 British Pershing Team to Camp Perry in the USA. Peter was very well respected both sides of the Atlantic for his shooting prowess, sound leadership and motivational acumen.

Naturally, Peter was an active shooting member of several civilian rifle clubs in the areas he was stationed. This included the City of Birmingham which he joined 1981 and where he enjoyed perhaps his most prolific and sustained periods of success. Certainly, he was very happy here and was the Club Champion eight times and 50 metre and Any Sights Champion on ten occasions. Even with all this personal success, Peter still found time to coach; including the Army Women’s Team to continued victory at the Inter Services and to mentor individuals to representative honours with England, Wales and Scotland.

Never satisfied with pure performance, Peter was an innovator and prime mover where sport administration and management were concerned. The list of his various appointments and roles extend far and wide, encompassing during his extensive career; Chairman of City of Birmingham Rifle Club, Staffordshire County Chairman, Army Team and Club Chairman and ESSU Committee between 1983 and 2002. Peter was until the end President of the Staffordshire Small-bore Rifle Association and Patron of the City of Birmingham Rifle Club. He was elected a member of the Centipede Club in 1987.

Peter will be remembered as much for his wit and buoyant good humour, many will testify to some memorable evenings spent reminiscing and living life to the full in the clubhouses of Bisley, the Army in particular. His commitment to the Pershing was well known and he was a leading light of their annual gathering at Bisley every year, many stories still abound and as a raconteur he was second to none. Peter bore the cross of being an Arsenal supporter well throughout his life, a fact he was not shy of telling people.

His leadership, coaching and mentoring skills have touched many, providing stable foundations and inspiration for their own shooting fortunes within the sport. All given willingly without favour or prejudice. Above all, Peter was a gentleman who always put service above self, an ethos and personal commitment he carried to the end. He will be sadly missed by many, but we were all better for knowing him and his memory will last long in the annals of our sport.