With £5, 700 of new shooting kit for the visually impaired, a Pembrokeshire shooting club is proving inclusive by name, inclusive by nature. The Modern Print Inclusive Target Shooting Club in Pembroke Dock received a Sport Wales grant of £4,560 for the new kit to offer more opportunities at the successful club. With members regularly winnng medals, and representing Wales and Great Britain, the club has now sets its targets on forming a visually impaired team to compete against others across the country.

The new equipment includes two air rifles, targets and the important electronic blind sights. The blind sight contains a laser that is pointed towards a target. The target varies in colour from the centre outwards. When the laser gets closer to the centre of the target it sends a high pitched sound to the earphones being worn by the shooter. The shooter has to make the judgement on when to pull the trigger in the hope of getting the maximum 10 point shot. 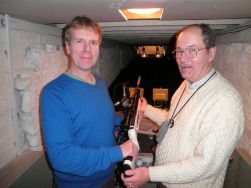 Ron Hovell, a finalist at the Sport Wales Coach of the Year awards in 2010, says that the kit will add a positive new service at the club, which was established six years ago. He said: "The electronics transfer the reaction of the laser into sound – so you want to be on the white centre and not the black outer target. The idea is that as soon as you get that sound screaming at you, pull the trigger. We’re now the only club in South Wales that currently offers shooting for the blind and visually impaired. Being registered disabled myself, I’m a firm believer that shooting is one the most accessible sports for people with a disability. Before we applied for the grant we had people interested so, even in just a few weeks, the kit is being well used. We’re hoping now that we can get enough members to enter the blind and visually impaired shooting league for next winter. There’s no reason we can’t be ready with a bit of practice."

The club has both 10metre and seven yard target ranges and is registered with National Small Bore Rifle Asociation.

Laurence Brown, from Pembroke Dock, is a new member who is already enjoying sessions at the club. He commented: "I had a taster session some time ago and really enjoyed it so I’ve just been waiting for the club to get the equipment installed and get going.It’s great. It’s a challenge but I’ve hit the target every time, and even the occasional bullseye. The social aspect is good as well. With a bit of practice and improvement, and few more shooters, we can enter the league and have the competitive element."

Carwyn Young is the Sport Wales Senior Regional Officer for Pembrokeshire and worked with the club on the successful grant application. He explained: "This is a proactive club that is increasing membership on a regular basis. The opportunity to provide shooting for the visually impaired is a great investment for us, particularly as the equipment is being used by new members already."