One of the benefits for the 1922 shooter was that on Running Deer there was plenty of room just behind the firing point to park a car. So a very short walk with a canvas rifle bag, scope and mat, and not much else, and you were ready for business.

On the other hand we are talking of 1922 when relatively few shooters enjoyed the luxury of having a car. Instead there was that great British asset of the time – an extensive rail network. Brookwood Station is, of course, a mile away from the camp, but for the duration of the July shoots there was the added bonus of The Bisley Bullet. For just a few old pennies, a shuttle service brought you direct to the Camp Station, now the Lloyds Bank RC clubhouse.

And also this is back in the time of the Big Four Railway Companies. It was when a return ticket was normally double the price of a single, not the £20 single/£21 return approach we see nowadays. But the rail companies supported our shooters, who could buy a return ticket for 25% more than the single fare, a concession that continued for a long time. Well, until nationalization! 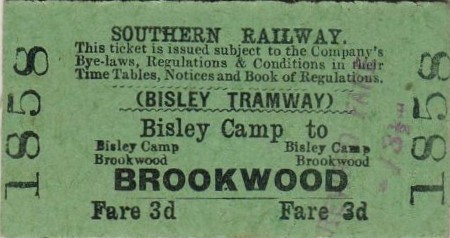