News from the NSRA

Cottingham Rifle Pistol and Air Weapons Club is located in the village of Cottingham on the western outskirts of Hull, East Yorkshire. On the first Sunday in July, Cottingham Day is organised by the Parish Council and a team of volunteers to bring the village a fun-filled day out. It consists of a funfair, entertainment, activities for all ages, stalls and much more.

In 2019 the Rifle Club decided to join in the event and benefit from the publicity by opening up their range to the public for the day. Planning involved liaison with the Parish Council and the local Police, confirming that by holding an Exemption Certificate the planned opening was legal, the range would be operating as a miniature rifle range.

Five club members confirmed they would attend all day from 10-5 and on the four lane range, two lanes were run as .22 benchrest and two as air rifle. A nominal fee of £1 allowed members of the public five rounds of .22 rimfire or a few .177 air rifle shots, with further payments allowing more shooting provided there was no queue. 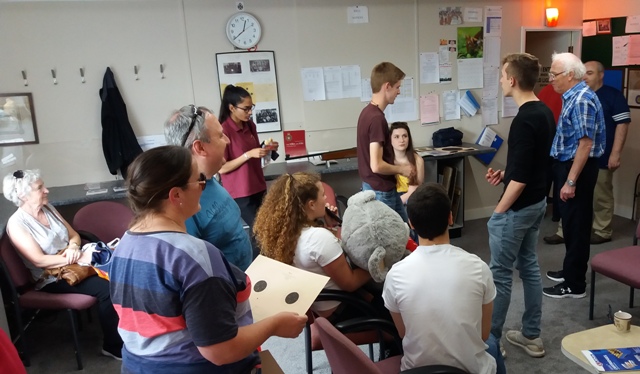 Normal NSRA standing targets were used for the benchrest, rather than benchrest targets, so that they only had two diagrams to aim at, making shooting simpler for novices and giving them a much better chance of hitting a scoring ring.

A member’s portable notice boards allowed us to create a large display by the entrance to the club advertising our presence with the added bonus that passing motorists and pedestrians not attending the event sometimes stopped to come in too.

The first hour proved rather too quiet, perhaps not helped by being 400 yards away from the main village stalls, but then a steady flow of people started arriving with the range operating non-stop until 5pm. With many people paying for £2 for ten shots rather than five we used about 400 rounds of .22 ammunition and broke open a second tin of 500 pellets.

Over 50 people tried their hand at shooting, with many more of their family members and friends also present asking about the club and what we do. Many expressed surprise that the club existed, they either hadn’t realised what our building was or thought it was no longer open.

The added bonus was that 1000 leaflets were printed and distributed advertising the day with the map pointing down the road to The Rifle Club – Cottingham Rifle Club “Have a go shooting”. The leaflet was also reproduced in the local Magazine circulated to every home in the area. The existence of the club was therefore well publicised.

The final dividend was within a week four people signed up for membership and the Parish Council Office now has leaflets in their publicity rack promoting the Club. Will we do it again next year – yes definitely.